Blog
You are here: Home / Blog / The Past is Never Far TO / Here Today, Gone Tomorrow: Found Photos from the 40’s 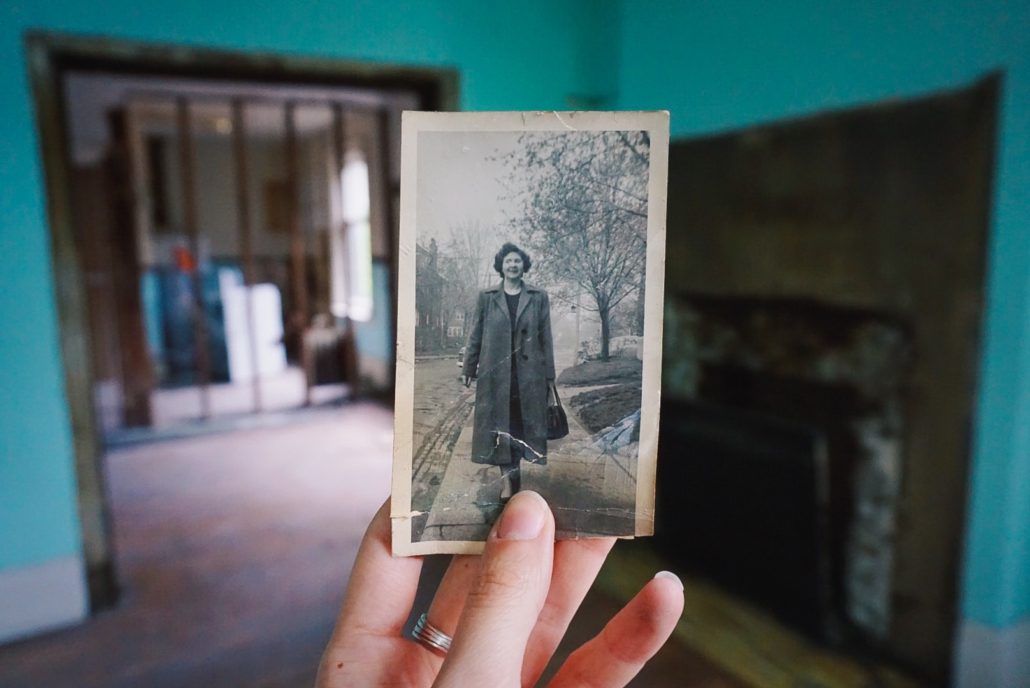 In an ongoing series of mine, I photograph the changes that occur in the century old low-rise I live in.

Over time, I have accumulated some interesting artifacts from within (and just without) its walls.
Some of the most interesting came in photographic form this week as construction workers tore apart the apartment across the hall from me. The building is 103 years old and on the heritage preservation list, however its classification only protects the exterior.

The workers ripped out all the beautiful wood trim and built-in wooden wall units, the sliding pocket doors, and much to my dismay, the antique fireplace and mantle – basically everything that made the space unique. 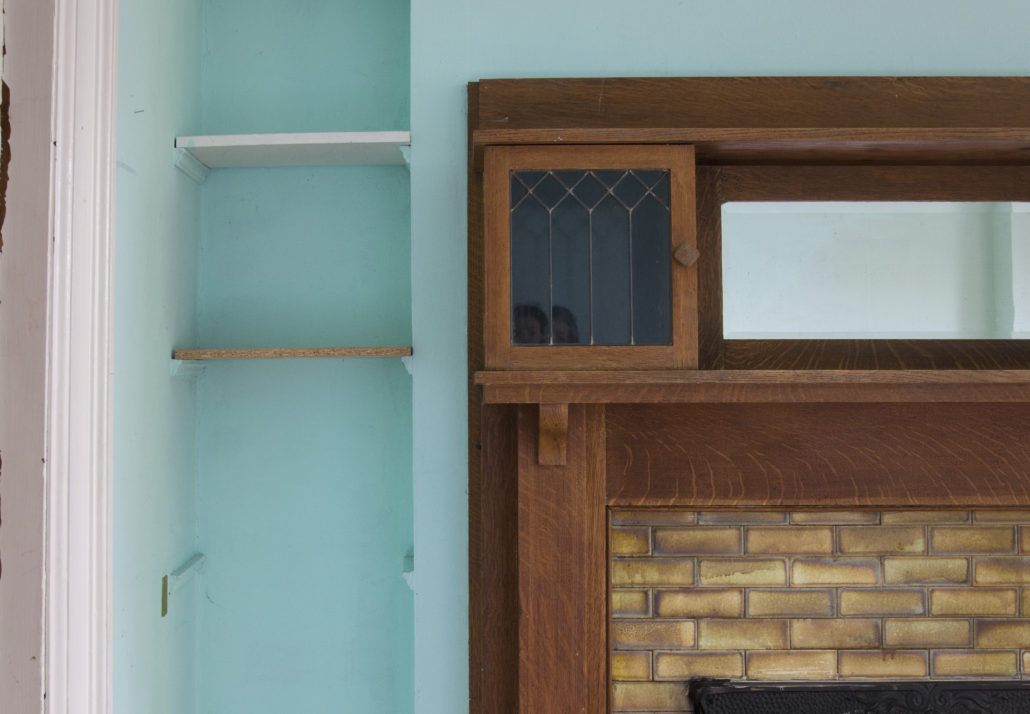 A couple decades ago the owner’s daughter had apparently come through and had all of the most valuable antique fireplaces removed and sold off. When I lived in apartment 3, I had a beautiful antique mantle still left in my bedroom, but when I moved two floors up to the top floor, the fireplace had been removed. It must have been beautiful.

Seeing this remaining mantle being removed from across the hall, I was determined to somehow salvage it. I stomped downstairs to cause a scene about heritage preservation when one of the workers said, “Our orders are just to scrap it, so… do you want it?”

As they removed the mantle from the wall, a century’s amount of dust puffed out. Once it settled, we noticed that on the ground behind the mantle there was five small, very dirty photographs. 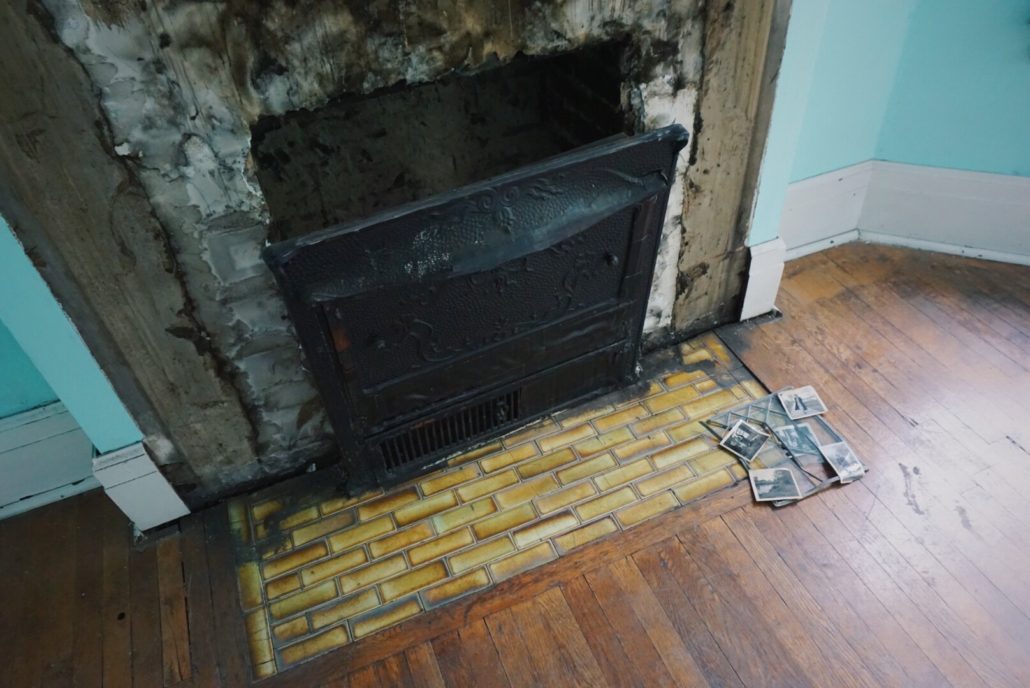 I let out a gasp and rushed to save them. I could tell instantly they were old, and had fallen behind there many years ago. The construction workers carried my new (old) mantle across the hall, as I began to inspect the images.

I got out my own family photos to compare. 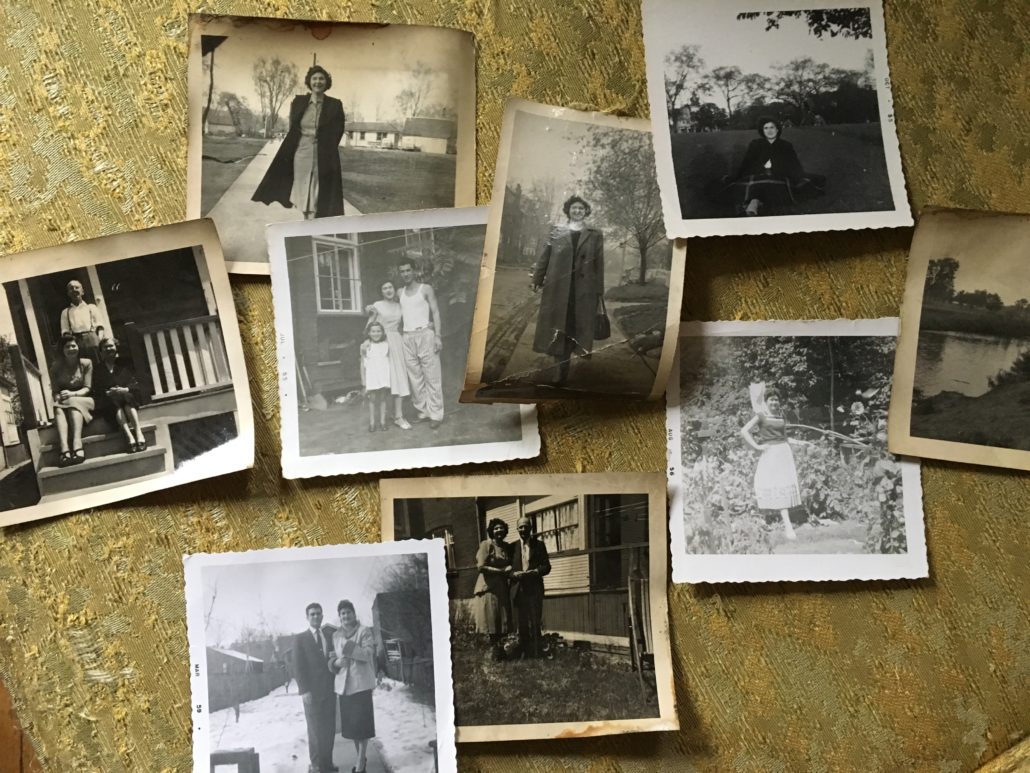 The white framed images are my family photos from the 50’s, while the off white images were the ones found dating likely from the 40’s.

I couldn’t base it on the colouring. My family images had been loved, cherished in an album for years. These had been sitting behind a wooden mantle, dangerously close to fire for who knows how many years.

Then I began looking at the clothing. My family’s images were taken with a brownie camera in the 50’s, and even my Great-Grandmother’s outfit looked more modern than the some of the outfits this younger unknown woman was wearing. The peplum in the image with her husband? The loosely fitted dress she’s wearing by the pond? More characteristic of the 40’s. 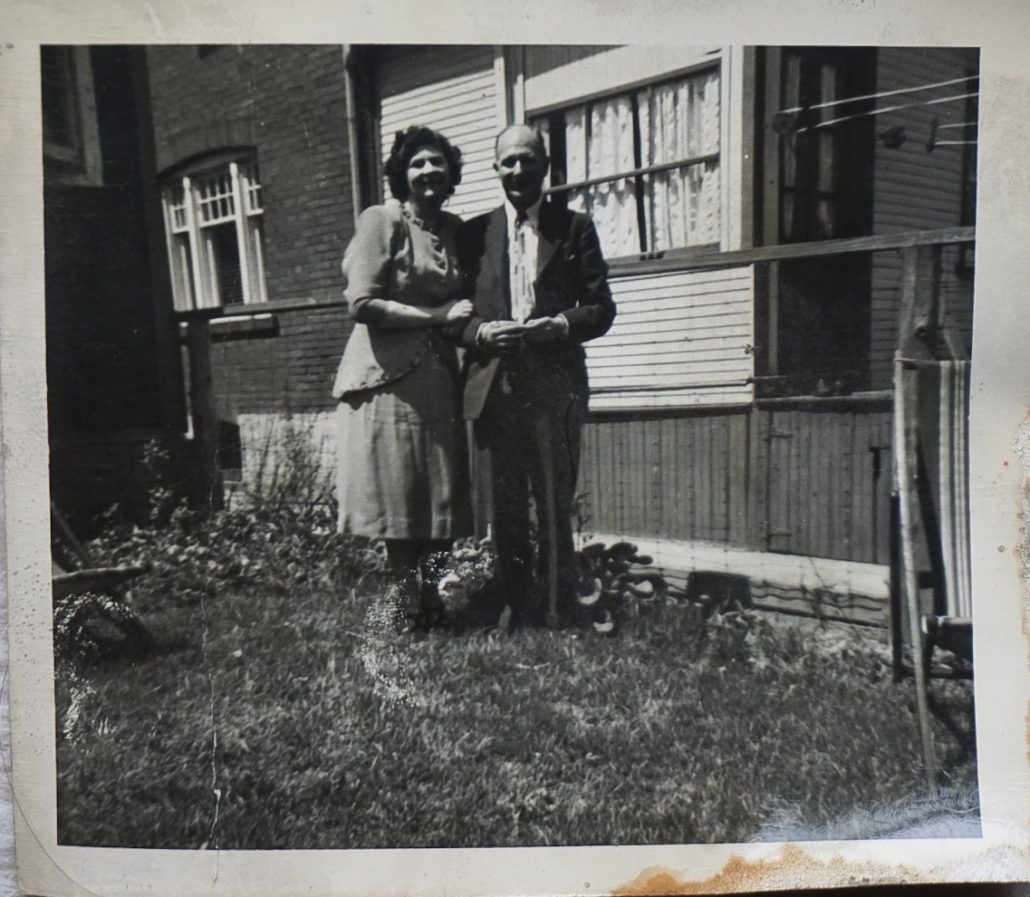 I thought back to my time as a student of photography and how we had learned that middle class images in the middle of the twentieth century were basically cookie cutter. I saw proof of this before my very eyes in the near duplication of these strangers’ photos: 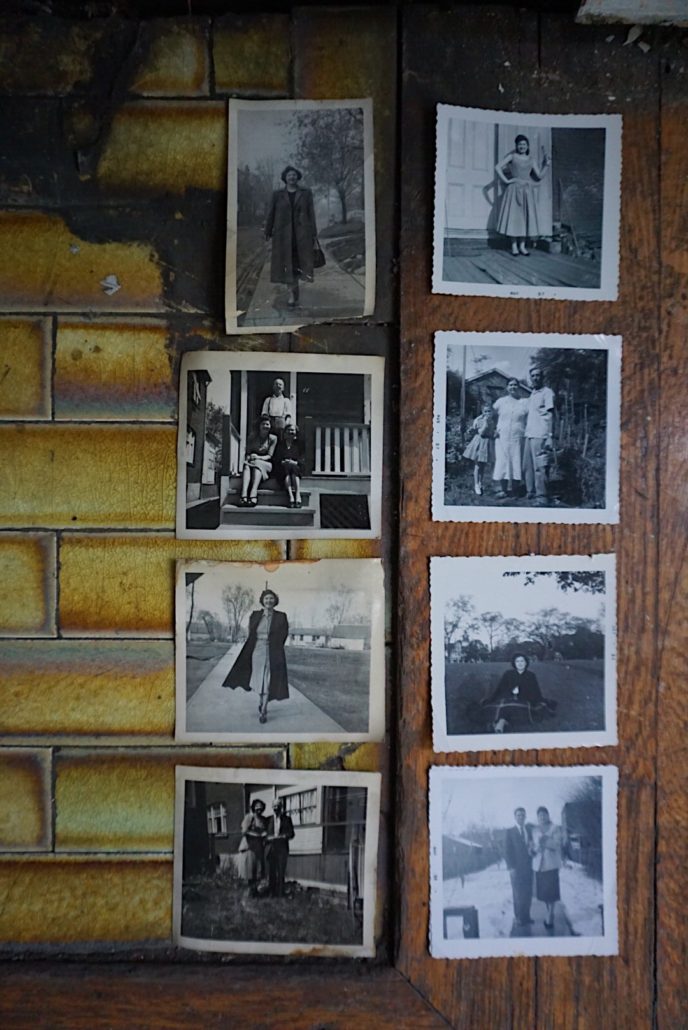 This is my wife.

This is my wife and my parents.

This is her and our house.

This is me and my car

This was the standard.

The husband was the photographer, while the wife was the archiver.

The history of my building came to my mind next. These units were designed for middle class bachelors. The hallway around the perimeter of the apartment allowed for the help to go about their work without disturbing the bachelor in his den. I do not think living on the third floor of this building would have been conducive to raising a family, which leads me to believe the younger man shown in only 1/5 images might have lived there alone for some time.

How had these images ended up behind the fireplace of his den? Why did they never make it in an album? Had he propped them up in an attempt to display them when they fell behind? Did she place them in the cabinet meaning to get to archiving later? 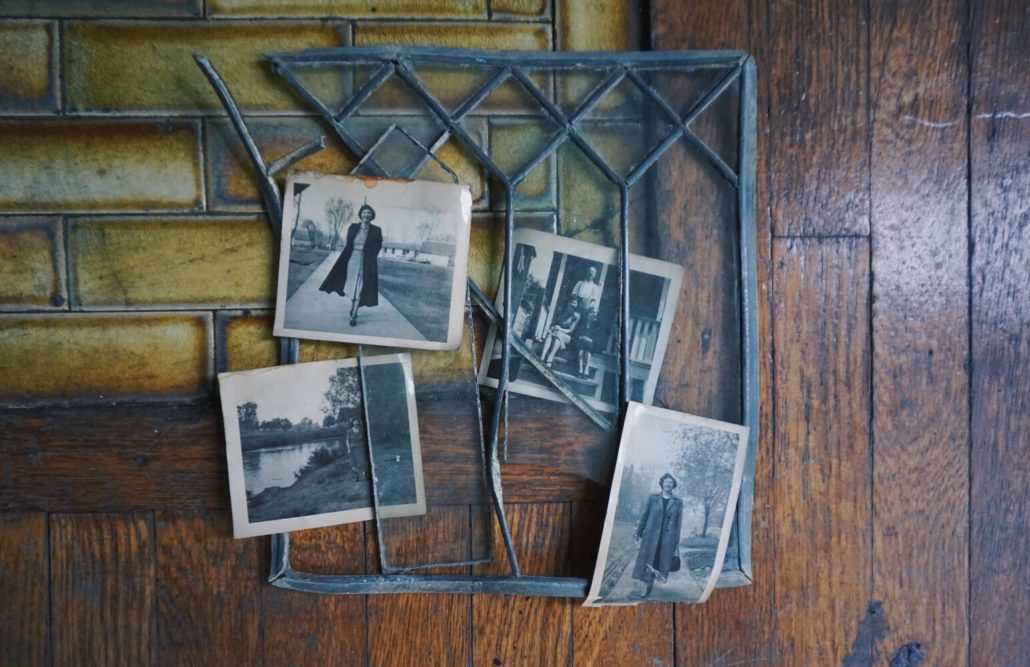 I really doubt she would have lived here. There was a brothel next door. Did a jealous lover find them propped on the mantle and casually toss them behind it? Did their careless child borrow them and misplace them?

Hard to know for now. My building’s management company still uses a fax machine, so I don’t have much faith in their archival abilities, although I do plan on attempting to look into the apartment’s history.

For now, I am satisfied that the Toronto Archives approves of my estimation that these images are from the 1940’s: 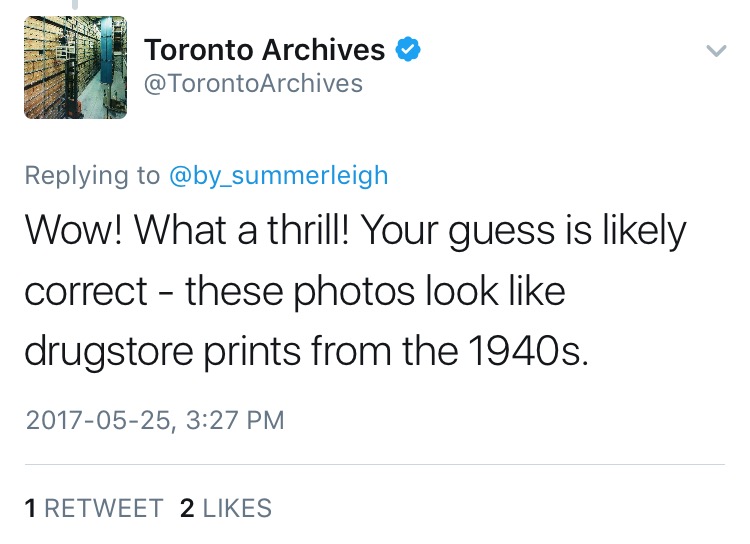 I Love This City.

My Haunted Exhibition at the Mackenzie House
Scroll to top