Blog
You are here: Home / Blog / Uncategorized / My Haunted Exhibition at the Mackenzie House 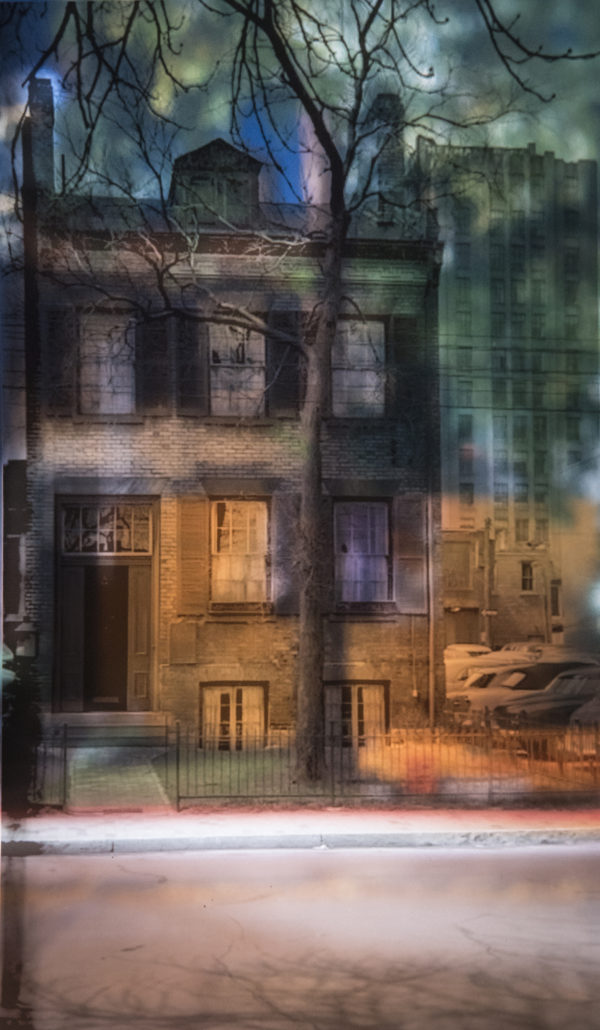 It was all fun and games when one of my framed artworks mysteriously came off its metal hooks and chains at the notably haunted Mackenzie House the first time, unbroken, but now that it has come off the chains for a second time and smashed? Well now I’m not sure what to make of the incident.

I will share with you the facts that I know, and you may draw whatever conclusion you will. But for me, this is the tale of my haunted exhibition at the Mackenzie House.

Here’s what I know for starters: I am down one 3’ shadowbox, and up a whole lot of confusion.

While it’s common opinion that Toronto history is boring, William Lyon Mackenzie, our city’s Rebel Mayor, happens to make a great case against that argument.  Mackenzie was a Scottish born journalist, politician, and rebel leader. He fought against the Family Compact, was exiled to the Americas for a time, and did I mention he had a pirate admiral?! [Read more about our Rebel Mayor with The Toronto Dreams Project]

When Mackenzie was finally allowed back to Upper Canada, as the last rebel pardoned, his loyal supporters purchased him a house at 82 Bond St. the very same house he would die in. The very same house I am currently exhibiting in. 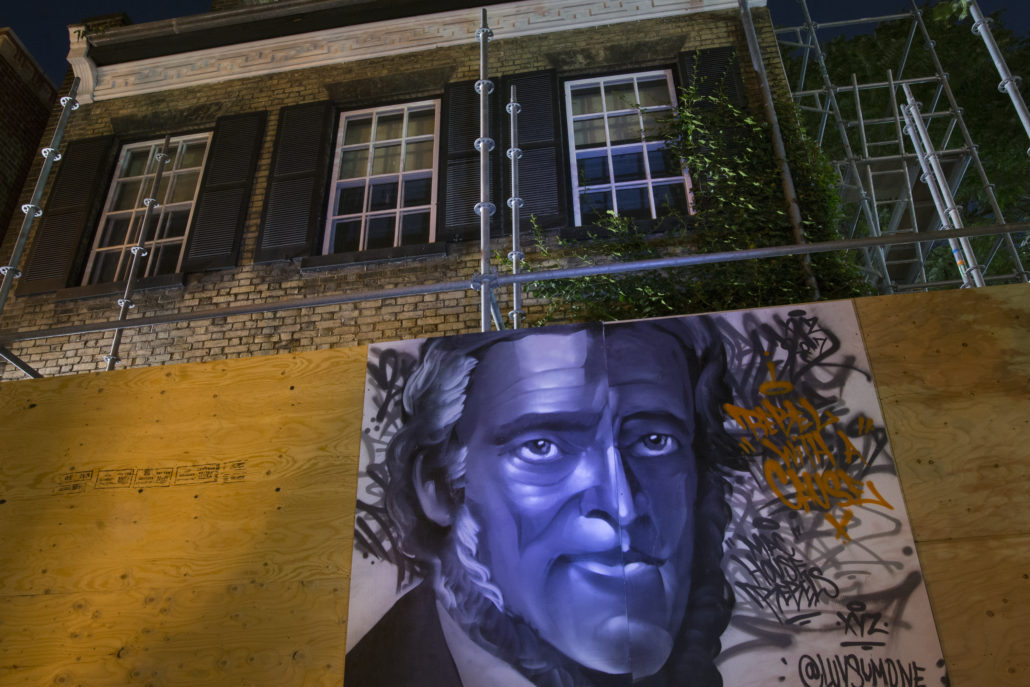 Mackenzie House is currently under restoration, but still open to the public!

The site has since been a boarding house turned museum and has a history of haunted tales. It is advertised as haunted which I am embarrassed to admit, somehow slipped my radar at first contact. I have exhibited at several Toronto Historic Sites in the past and so the museum director, familiar with my work invited me in for a visit. I admittedly have been distracted with a new project, EnvisionTO, and hadn’t yet read into the history of the Mackenzie House.

As I was waiting for the Museum Director my first time in the house, I heard footsteps coming down the stairs multiple times. I would turn to smile, but no one was there. It’s one of the historic sites I haven’t been in yet, so out of curiosity, I got up and left the newer built extension and entered the historic house. I walked in wondering if there was a hallway that the person making the footsteps had disappeared down and to my surprise there wasn’t. I remember thinking, “Huh, that’s weird.” but then I turned and saw the stereoscope sitting on the table across the house, was distracted, and thought nothing of it.

Nancy took me on a tour of the house after our meeting and as she got to the wreath at the top of the stairs she noted, “We do a lot of arts and crafts here. We are thinking of switching this wreath out to be one made of human hair. It was a common practice back then and ties into our theme of “haunted house.”

Somehow, it was the first I had heard it advertised as a haunted house. My thoughts went right to my series and how many have described the works as a little “haunting.” It was the perfect fit! I didn’t put much thought into the actual haunted nature of the house until I got home.

When I began looking into the “haunted Mackenzie House”, my first reaction was to feel completely silly for not knowing it’s noted as one of the most haunted houses in our country, but as I kept reading, my reaction changed… “Huh,” I said to myself. In every single post about the house, it notes the activity, “Footsteps on the stairs” as a common occurrence.

I might have put the footsteps out of my mind earlier, I thought, but I definitely didn’t imagine them, because they made me physically stand up and enter the house out of curiosity. I kept Googling. Other reports include the piano playing on its own, a small girl named ‘Elizabeth’ appearing by Mackenzie’s dresser, the historic press operating on its own, and a male resembling Mackenzie who appears on the third floor. The most intriguing tale of haunting at the house is the story of the “grey lady” on the second floor. In the 60’s, a caretaker and his wife were living at the house and reportedly, one night, the woman awoke to a female spectre emerging from the wall above her head. The story goes, the spectre slapped her so hard her face welted, so they left. However, according to a couple websites, the caretakers had recanted their stories later on.

So I put the “haunting”out of my mind and continued selecting artwork for the exhibition I had been offered. The museum works with Ryerson University regularly, where I studied photography, and is about a stone’s throw away. So I figured I would feature some of my Ryerson pieces! Except that again, a key piece of historical information had (apparently?) slipped my radar.

On the eve of Canada Day, one of my pieces featuring Ryerson University, that hangs directly across from where Mackenzie’s portrait had been hanging, mysteriously came off its metal chains. Staff found it in the morning with one of the hooks broken, 1 of 2 chains down, and the piece leaning completely undamaged against the wall. You’d think if the one hook had broken, the piece should have still been dangling from the second chain? Or dented or scratched, or sitting face down! But the first maintenance staff member in for the day found it just like this: 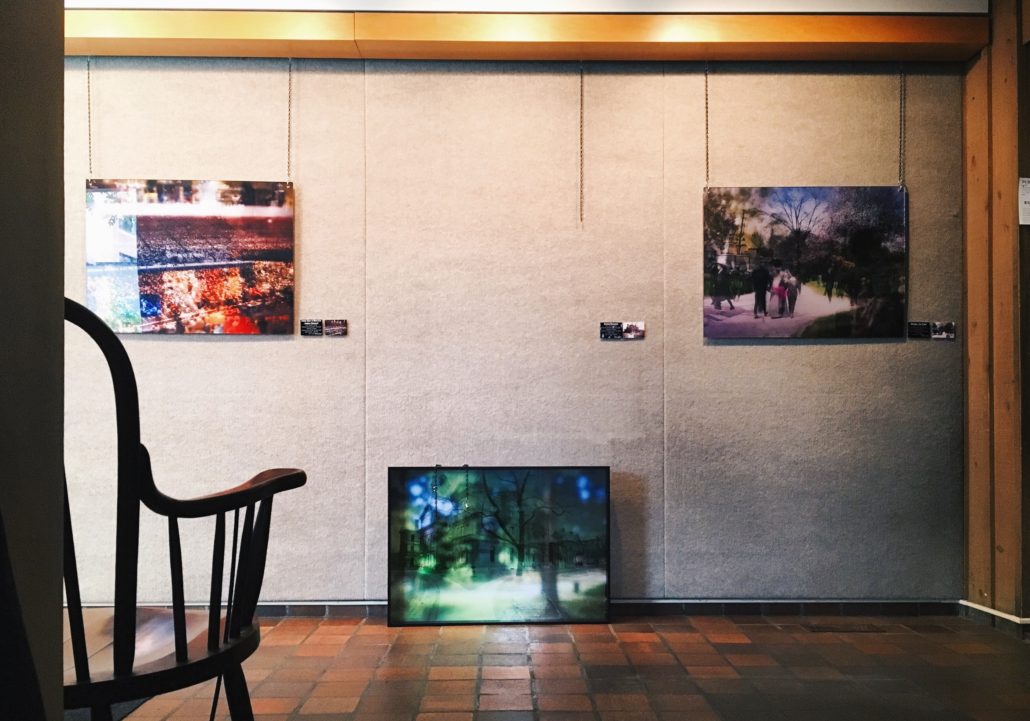 Bruce, one of the historical actors on site, knows all there is to know about Mackenzie and I looked at the piece on the floor and at Mackenzie’s statue on the wall outside and said, “…Was Egerton Ryerson alive when Mackenzie was alive? Did they get along?” And I swear some colour drained from their faces as I asked it.  The staff members explained to me that Mackenzie and Ryerson had fought for Reform on the same side before having an awful falling out. It’s even noted that Mackenzie had warned that they wanted “to hang Egerton Ryerson on the first tree they met with,” could they apprehend him during the Rebellion. 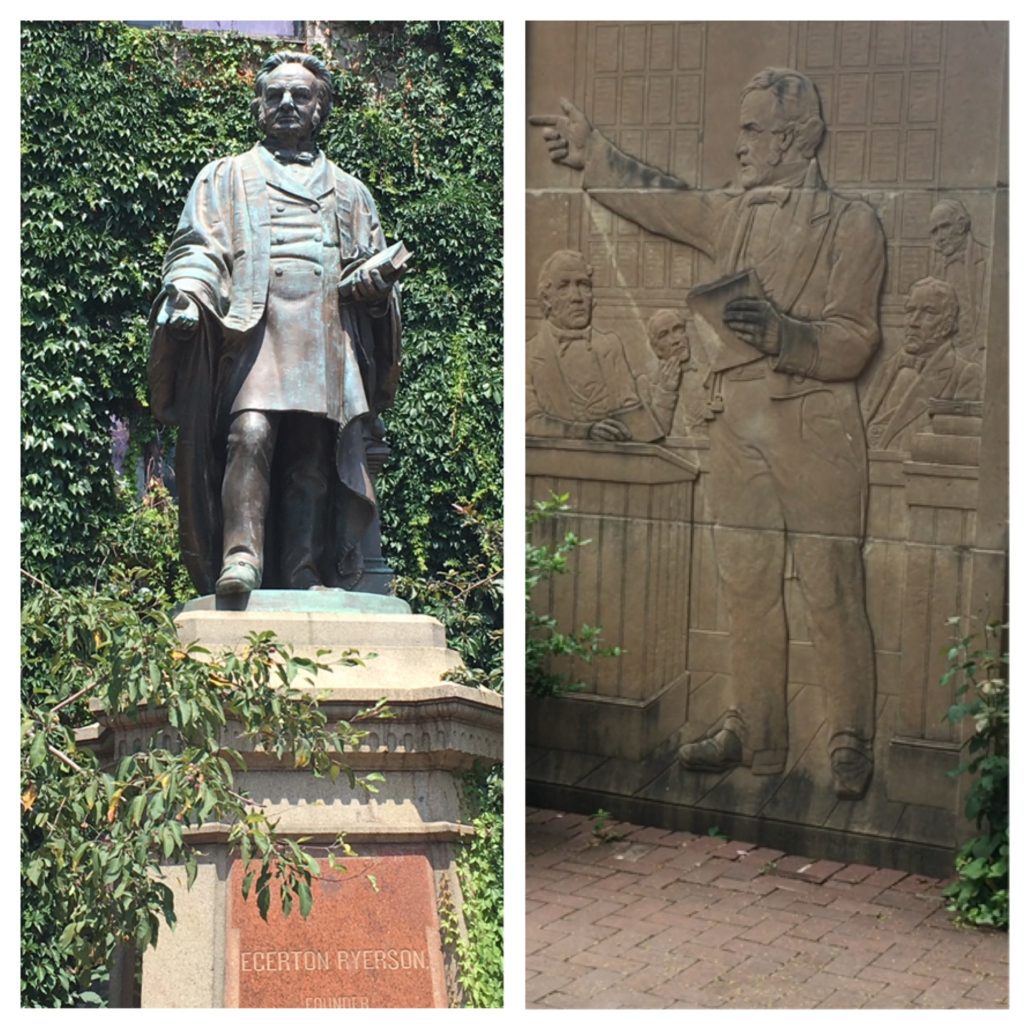 My jaw dropped. I had hung a piece of one of Mackenzie’s nemeses, right across from his portrait, in his haunted house… and it fell to the floor.

When I told my Mom what had happened she immediately panicked and asked, “Did you take it down?! You better take that piece down, that was a warning, Summer!” I told her I had worked with staff to get rid of the plastic hooks and re-hang it and secure it with metal hooks and chains. I have had over 6 solo shows, I was confident it wasn’t going to come down. …although I really wasn’t confident at all.

Hearing her say it out loud though made my own concerns seem a little crazy, so I focused on work, and left the piece up even though deep down I knew she was right. Two weeks to the exact night… the piece fell to the floor again, and this time it shattered. I got an email the next day from Bruce with the following photo: 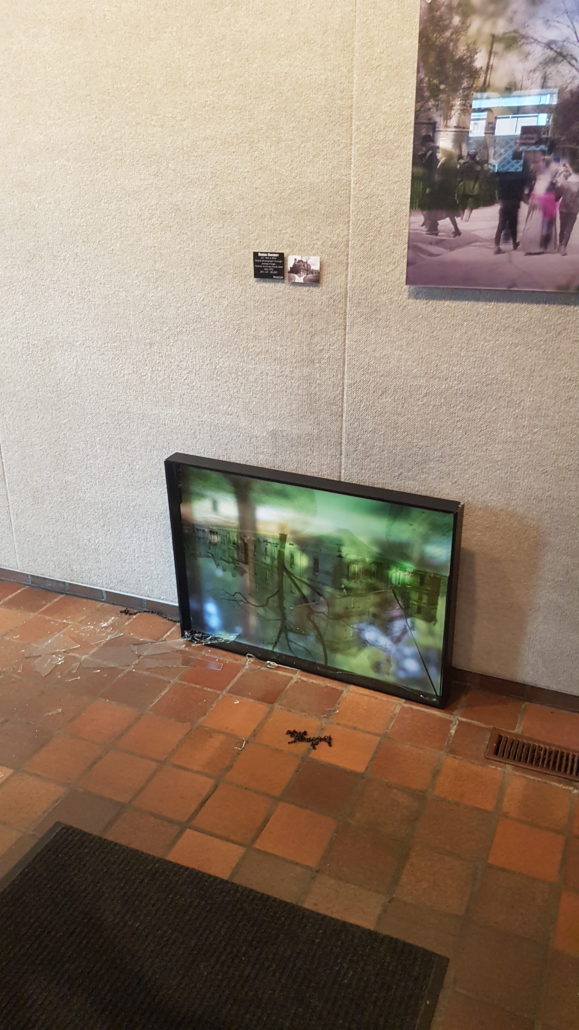 Fallen piece of artwork at the haunted Mack House featuring Ryerson. Mackenzie and Ryerson had quite the falling out.

So I went in, took the hint, and removed the pieces referencing Ryerson University.

But what irks me most, is that when I went in the second time, the same old plastic hook that had been used the first time was back on the racking. After the piece fell the first time, I replaced all the plastic hooks with metal ones, and made sure they were secure myself. Bruce was there too.  As I held the plastic hook in my hand that I was sure I had got rid of, I felt a familiar feeling wash over me. It took me a second to place, but I realized it was the feeling of uncomfort I felt when my roommate and I had recently been watching the most recent season of American Horror Story. That feeling where viewers are yelling at the unknowing, unbelieving characters on screen to take the hints the spirits are laying down and get heck outta there? Well that’s the feeling that washed over me IRL. So I took down the pieces, apologized to Mackenzie, and am working to ensure he stays comfortable in his home for at least another 150 years by commemorating him in our next project [Come visit us at Nuit Blanche!]

It’s been three weeks since the first incident, and one week since the piece smashed. Does Spectre Mackenzie like Friday evenings? Will he come to life this evening, see the Ryerson artwork gone, and approve? I certainly hope so.

The Past is Never Far will be up at the Mackenzie House until September 15th.