Blog
You are here: Home / Blog / The Past is Never Far TO / King and Yonge Sts. 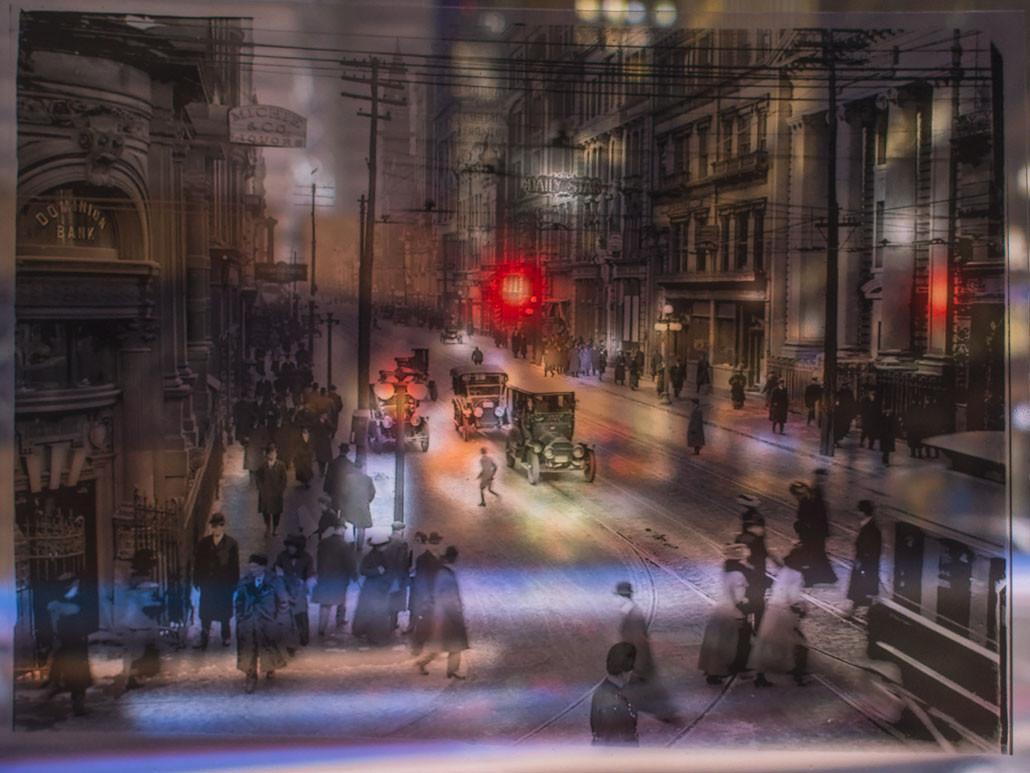 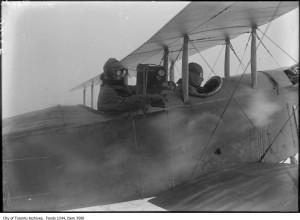 *** Local Caption *** Item consists of a photograph showing William James Sr. filming from a plane. The pilot is Bert Acosta.

William James Sr. was the man running around climbing to the tops of buildings for a photograph before it was cool. He was the original Toronto on Top photographer. He was the first man on the planet to shoot moving images from a plane, and shot the first ever aerial photographs of Toronto. He moved here from England in 1906 as so many of our ancestors did, and in his 30 or so years shooting here, was able to capture over 10,000 stunning images of our city, most of which were shot on glass slides.  He also had the help of course, from his son Norman James. I’ve been following in James Sr.’s footsteps for over 2 years, trying to re capture the scenes he documented a century before I arrived to the city, and let me tell you, this guy was all about his angles. I was trying to re shoot this image [above and below] from 1909, which is funnily exactly 100 years before I moved here, and I realized he wasn’t just standing on the sidewalk, or up in the building on the southeast corner, no, he was likely on a ladder or up the hydroelectric pole.

The intersection of King and Yonge streets in Toronto has always been a busy one, today it stands in the core of our bustling financial district. Today on the corner where James would have been standing sits a Shoppers Drug Mart. I had tried several times to procure a ladder from the Shoppers, but when I had been given a resounding “No” time and time again, I was forced to bring my own. It’s a busy site, so I went late in the night with a ladder to shoot through the glass plate taken by James to what exists there today. The image above was made by using a glass plate of the image below to the left which I shot directly through to the scene on the right.

The building to the left in the image above is 1 King West and once stood as the Dominion Bank. In the mid 1900s the Toronto Bank (which stood one street west of here) and the Dominion Bank merged and became Toronto-Dominion Bank which still stands one block west of here to this day within the TD Towers [as shown below]. Today, TD Bank is the second largest bank in the world. 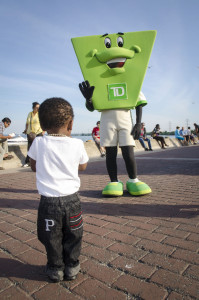 I have photographed countless community events for TD including many Music Counts charity concerts where public schools have been sponsored to purchase more instruments or the TD Jazz festivals that bring artists and guests from around the globe, and my favourite has been working with TD Bank the past four years for Pride, having shot for TD’s Friends of the Environment park booth on Church St. this past year.  As a student of fine art, I wonder at every gig what my Ryerson professors would say about shooting corporate events to pay the bills, but when I’m given the chance to document and engage with my community in fun and creative ways, how could I possibly say no? For example, when shooting at Salsa on St. Clair last year, TD Bank and a client of mine set up a beautiful life size story book to find out the stories of their customers’ travels to Canada. The kids lit up on the book’s set, had so much fun and stories I got to hear that day will stay with me for the rest of my life.  I’ve been shooting for TD Bank since my first year of university and when I came across that image that depicted their roots in the city I wanted to include it in my series. I researched the history of the Toronto born bank which helped paint an even richer history in my mind when shooting a certain special event. I was the event shooter for a birthday party a TD branch threw for a 90 year customer turning 100 years old. I was one of the few who got to meet him and hear his stories and when he opened the card made for him I gasped quietly recognizing the historic Dominion Bank image they had printed on the cover of his card. He chuckled and said, “You got it right! How did you know?” as he pointed to the window in the image opening the card. Everyone else in the room looked around as if unsure what he meant. I had seen the image before and knew it said “Dominion Bank” in the window he pointed to. 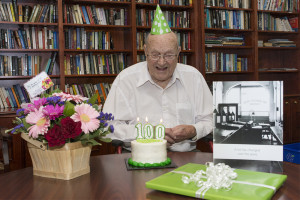 “So you were a Dominion Bank customer before they merged with Toronto huh? Wow! And how was the transition?” And although I asked with jest he laughed with inspiration and carried on with tales of that point in time. He had been a supreme court judge and hearing his stories I could just see the men on horses carrying urgent messages from Hamilton to Toronto. I could not even fathom having experienced and seen what that man had. At one point in his career he had put away a man in prison for heinous crimes, and one night the man escaped. The criminal had vowed that if he ever got out he would kill him, and his life had depended on a trustworthy group of men who could ride a horse fast enough to get messages to anyone who might have known the criminal. I realized how absurd it must be to have seen a time come when you could push a few buttons to achieve what an epic journey on horseback once had to. I listened to his stories with my jaw dropped as he recounted some of his best tales for us. 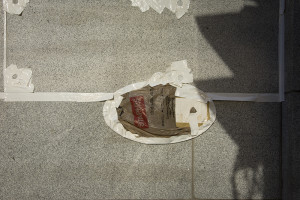 I stopped at 1 King West the other day, where that Dominion Bank building standing on the southwest corner (to the left) of the image once was as there was a couple guys patching up the facade that had just been re-exposed since it’s renovation. I asked what they were doing and if the historic plaque was to go back on the building. They were excited to tell me about what had been going on and had even heard of the series I was working on. “There aren’t many Summers out there taking photos of all my favourite heritage buildings!”  He took me inside and showed me the ballroom upstairs that held stunning, ornate coat of arms from every province carved into the ceiling, and the ostentatious vault that sits downstairs, once belonging to the Dominion Bank.

Some time later in my research I found another image taken by James in 1912 of the same intersection, also from up high, but from the corner of the street the Dominion Bank sat on. Luckily for me, that was back when 1 King West was covered in scaffolding. I wanted this image to be a daytime shot as you can see more of the present behind the image. I climbed up the scaffolding about one and a half storeys and began shooting, I even lined up a modern day streetcar with one that would have passed James Sr. a century ago. 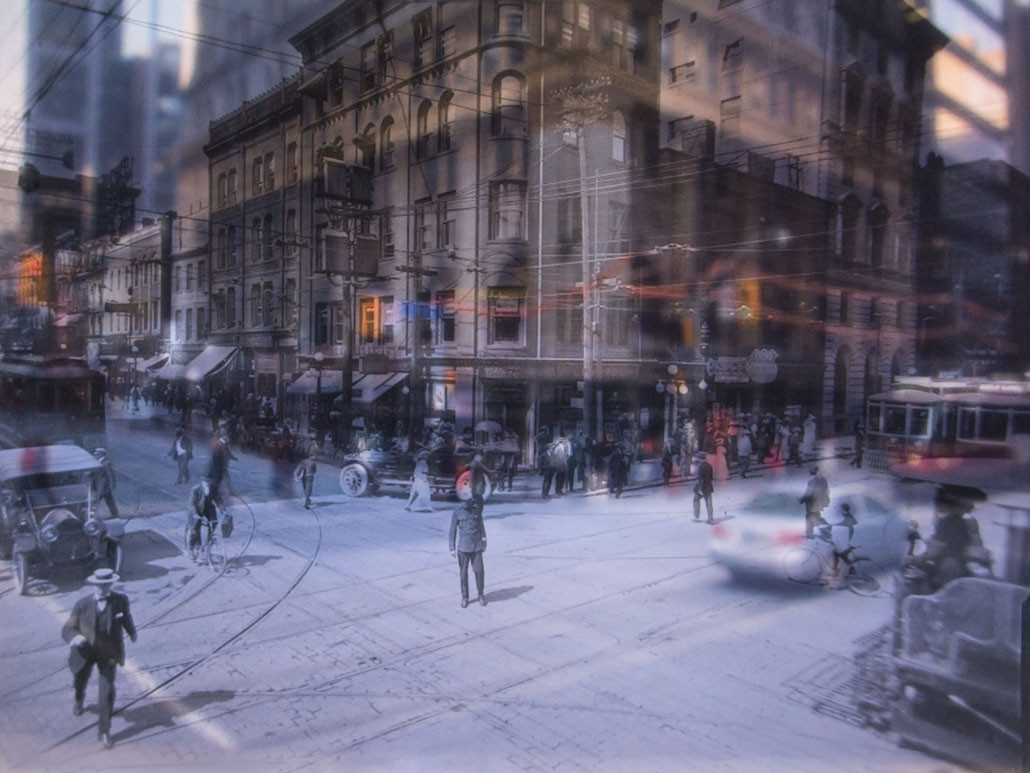 Northeast corner of King and Yonge a century apart in views.

I was able to line up the image perfectly due to the fact that the three storey building to the middle, left of the image with the three arched windows still stands in its place today. While sitting up on that scaffolding looking through that glass I couldn’t help but think the past is never far.

The Past is Never Far: Toronto, the Series’ Inspiration

How Photography has Influenced our Obsession with Female Beauty in a Postmodern...
Scroll to top